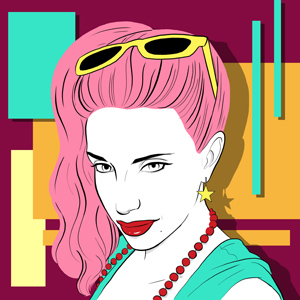 Long Island. September 27, 1985. Some called it the storm of the century, but for those who were there, it has only one name: Gloria.

It was an unusually warm September evening, and Roxanne was where she often was on a Friday night - in the bathroom with the radio cranked, a few pouches of cotton candy Pop Rocks and a pair of purple crimpers set to incinerate. Oblivious as the storm picked up speed outside of her bathroom window, she kept turning the radio louder and the crimpers hotter as the winds grew stronger. Trees began to tumble, taking power lines with them like Lincoln Logs onto Tinker Toys.

When she woke the next day, Roxanne's recollection was hazy at best. The last thing she remembered was hearing the DJ introduce "Tarzan Boy" over the din of crackling candy as she touched the crimpers to her ever-mounting coif. But that's when it happened. What exactly happened? No one knows for sure - chaos and power outages were reported across the island. What is clear is that Roxanne was never quite the same.

For starters, her hair was purple. Or pink. Or blue. Somehow her hair had started to change colors based on her mood, the weather or maybe the alignment of the planets. Scientists were never able to fully understand this phenomenon, although their research did lead to the discovery of thermochromes, the underlying technology for Hypercolor clothing. Roxanne was also unable to get "Tarzan Boy" out of her head. Ever. The chorus now rung out between her ears at all times, torturing her and rendering her helpless, which was particularly cruel as it had been her favorite song. Eventually, she realized that the only way she could control it was to sing.

Singing drowned out the endless cycle of "oh oh ohs" in her head. So she started singing and never stopped, venturing out for a life on the road. First working the familiar haunts of Long Island, she was rumored to have taken up a torrid affair with The Piano Man himself. In fact, some believe that although Roxanne's fateful night in September isn't mentioned in the song, it was the inspiration for "We Didn't Start the Fire" and consider Storm Front an allegorical concept album about their relationship.

All these years later "Tarzan Boy" is still there, albeit a little quieter now, and you could say that through Roxanne, Gloria is still raging up and down the East Coast and beyond with the Legwarmers.