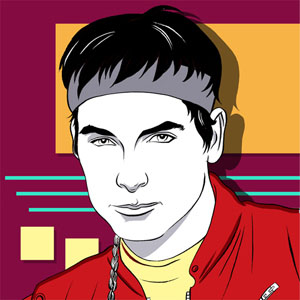 Gordon Gartrell was at the top of the world. A Wall Street tycoon during the bull market of the 1980's, he had it all...until his massive hubris caused him to throw all of his money into Cabbage Patch Kid futures. Plunging him into financial ruin and an even deeper depression, Gordon was on the verge of suicide when one word from the television caught his attention: "jitterbug." As if in a trance, he looked over the barrel of the gun in his mouth to see two colorful men prancing around onscreen, and on one of their shirts, young Gartrell noticed a slogan: Choose Life. Gordon burst into tears and threw down the gun, and he's been choosing life ever since as the pyrotechnic lead guitarist of The Legwarmers. Ladies flock to Gordon's side of the stage to bask in his flaming guitar licks and fancy finger work on the guitar neck... but would they be as turned on if they knew Gordon's secret? A secret that his pink stage ensembles, curiously high vocals, and inexplicable love of "Wham" only hint at - Gordon Gartrell is Canadian.