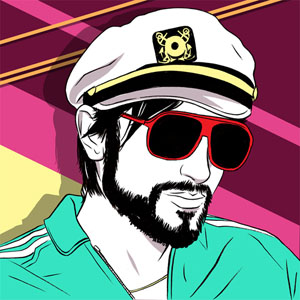 Captain Morgan Pondo hails from the mythical Isle of Yubebe, where he was conceived in the belly of a whale that had inadvertently inhaled his skinny-dipping parents, Ahab and Ariel. Initially thought to be a stray mer-child when discovered by an overweight but lovable skipper and his dim-witted companion, Pondo spent his formative years locked in a bamboo-shuttered hut with nothing but a transistor radio wired to coconut-halves. Fortuitously, the radio signal only picked up WAVA, Washington D.C.'s hottest '80's station, which provided young Morgan hope that somewhere beyond his marooned island life there was a world where people danced on ceilings, rocked down to Electric Avenue, and didn't have to take their clothes off to have a good time ñ all completely foreign to the palm-frond-clad, sea-lion-reared lad.

By one lucky (for Morgan, albeit terribly unlucky for humankind) twist of fate, an oil tanker happened to drift horribly off-course in 1989, striking a nearby coast and sending plumes of smoke, oil and one obliviously drunk captain to the island. The skipper - a lapsed cannibal - nimbly caught and ate the Valdez's captain, while Pondo absconded with his clothes and, in a legendary case of turning lemons into lemonade, made off in a raft built from the oil-caked carcasses of seafowl and otters.

Upon his arrival in the States, the Good Captain (as he was now known) opened the hugely successful 'Club Seal,' where he played island-fauna marimbas in a Legwarmers covers cover band called 'L¸s sT¸l,' until he got the call to join the actual Legwarmers. He now entertains audiences from the salvaged prow of his ship, the S.S. Sudio, and is sponsored by spermwhalebone.com, which makes his prosthetic arms, as well as the Hooters, who make him dance like a wave on the ocean. When not rocking your face off, the Cap'n enjoys a good game of canasta and a slightly warmed brandy and brine shandy.