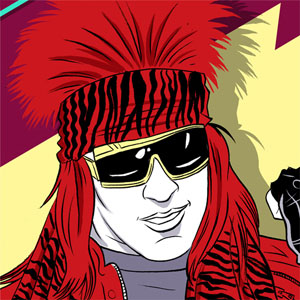 Clarence McFly's story begins on the mean streets of Rapid City, South Dakota, where he was found, swaddled in rags, on a mysterious floating skateboard amidst the remnants of a time travel experiment gone wrong.

A solitary but gifted child, Clarence was soon dancing before he could walk and beat-boxing before he could talk. He bounced from one orphanage to the next - Rapid City has more orphanages than any other city in America - before finally taking to the streets at age nine with just his futuristic skateboard and a ghetto blaster. For seven years, Clarence breakdanced his way across America, perfecting his moves in the warm glow of oil drum fires and the cover of bridges, until one fateful evening in Asbury Park, NJ.

It was a night like any other, Clarence was cutting cardboard outside the Stone Pony and a small group had gathered to watch. A tall, shadowy figure called the Big Man* emerged from the crowd and started matching Clarence move for move, step for step. It was a dance-off between two masters - cross-legged flares, corkscrews and Frankensteins - that went late into the night until the Big Man, frustrated by his inability to best Clarence, decided to change the game. The Big Man pulled out a saxophone and began to wail before handing the instrument to Clarence, who had never seen, let alone played one. But Clarence put the horn to his mouth as though he had done it hundreds, if not thousands, of times before and started blowing a beautiful, soulful tune. From that moment, all tensions disappeared and the two became inseparable until a bitter falling out over Clarence's contributions to the Big Man's album "Hero."

Never one to share the spotlight, the Big Man grew jealous over the increased attention that Clarence was getting from the media and refused to acknowledge his role in the album, despite the fact that Clarence had played all of the sax parts so that the Big Man could "concentrate on his vocals." A man of principle, Clarence packed his sax and his moves and has been playing with the Legwarmers ever since.

*As part of the sealed court settlement over the Hero's royalty dispute, Clarence is legally barred from using the Big Man's real name in any public forums.