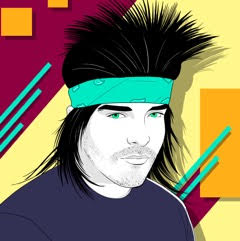 Johnny Phoenix went missing from San Dimas, California thirty-three years ago when he wandered into the wrong, but unquestionably most excellent, phone booth. He had been on his way to play the gig of a lifetime. His band was opening for White Snake, and if things went well he might finally hit the big time. He'd nearly gotten to the show when his trusty Nissan 200sx broke down. No biggie, though; he'd phone for help. He pushed his jacked-up jalopy to the Circle K when he saw a phone booth seemingly placed in the middle of the parking lot. When he got out and approached the booth he came across a man wearing an elegant, almost futuristic trench coat who told him not to use that booth; it was reserved for his friends. Johnny couldn't believe this guy's damage, he was calling dibs on a phone booth! Instead of tucking tail, he unleashed that famous smile that always impressed the girls in the front row and said, "I'll be done in a flash, dude." A flash is exactly what happened next. As soon as Johnny closed the booth's door behind him the earth moved and he felt a jolt of electricity. The phone booth torpedoed below the parking lot and traveled into the future on the circuits of time to the year 2021. Johnny hit his head against the booth and was knocked totally out. When he came to, he sensed he was in a strange land. Johnny opened the door and saw people walking around with white devices in their ears, looking down as if watching tiny televisions on strange walkmans. He turned to hear a little kid ask his mom what the phone booth was. Hadn't the kid ever seen a payphone before? He was in a parking lot, and the cars were quiet and boring. No one seemed to need a key to open their doors either. What was going on? Was he bugging? Where was he? He had to make that gig! That's when he finally heard a familiar sound--the opening strains of 'Here I Go Again On My Own'. He followed his ears to a garage where he saw a gnarly group of musicians rehearsing most triumphantly. The guitarist looked his way and asked if Johnny was versed in the ways of rock. As a way of responding, he picked up a guitar, strummed a few chords, and sang a soulful melody. The man, who he learned was none other than Gordon Gartrell, nodded with approval. Though Johnny didn't think he would ever make the gig he set out for a quantum leap ago, something told him he had stumbled onto something even better. This group felt like home. Now Johnny Phoenix plays with planet Earth's premier 80s tribute act. But to Johnny, it's not 80s music; it's simply the best music ever. Maybe someday that excellent phone booth will take him home to 1988 San Dimas, California, but for now he sings and shreds most bodaciously with The Legwarmers.