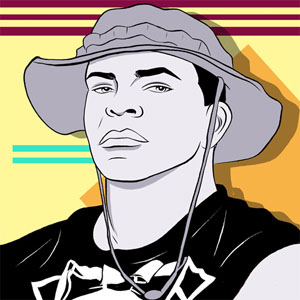 Knight Industries, best known for "The foundation for law and government" and the automotive crime-fighting robot "K.I.T.T.", one day decided that their quest to protect the good, the helpless, and the innocent was not enough. Immersed in a world of scoundrels and general wrongdoers, Knight Industries realized that they needed to do something to remind the good and decent part of society that the world isn't such a bad place.

In 1982, a humble rhythm android set off on a journey spreading arts, enlightenment, good times and overall well-being. His mission.........to CHANGE THE WORLD!!

Built to serve the corporate branch that would be known as "The foundation for arts, enlightenment, good times and overall well-being", K.I.R.T.T. (Knight Industries rhythm 2000), a.k.a. KIRTT-O-TRON, a.k.a. Lavaar Huxtable was born.

Lavaar operates at an unbelievable 1.21 Gigga-watts and is powered by coffee, cigarettes, Cosby re-runs and TACOS!! (He loves to eat Tacos). At the normal operating temp of 70 degrees, he can be somewhat moody and lethargic. This changes drastically once fitted with the optional flux capacitor, OU812 Lover chip, 11-piece Simmons drum unit, beer, and the body temp of 88 degrees. When all of the above components are in place, he is able to leap tall buildings in a single bound, run faster than a locomotive, provide a sensual array of electronic beats and sounds that cannot be denied and it is most definitely HAMMER TIME!!!