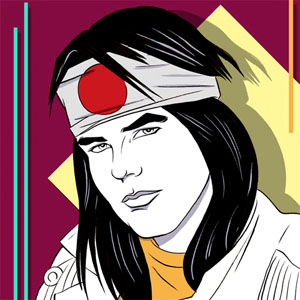 Burdened with terrible guilt for crippling the 80's pop culture he now fights so hard to preserve, Cru Jones is a tormented soul. A carefree and devilishly handsome child actor in the early 80's, Cru starred as a young male character from a neighboring boys' prep school on the sitcom smash "The Facts of Life." In the show's infancy, the female cast at "The Eastland School for Young Women" had been a large and sprawling one, until one by one, the young starlets were turning up a "family way," throwing the sitcom into a tailspin - the format was changed drastically and the lineup was slashed to just Jo, Blair, Tootie, and the fat one. On a whim, Cru's parents, deeply shamed by their hellion son's lasciviousness, rented "Karate Kid II" for their BetaMax, and less than 24 hours later, the young lothario was shipped off to Korea to learn discipline and wisdom. Fifteen years later, Cru Jones returned from the Orient transformed, a man forever cursed by his inner demons but determined to bring honor to his clan. Yet as a member of the Order of the Legwarmer, this samurai no longer wanders alone.